Bourbon Street of the French Quarter in Louisiana 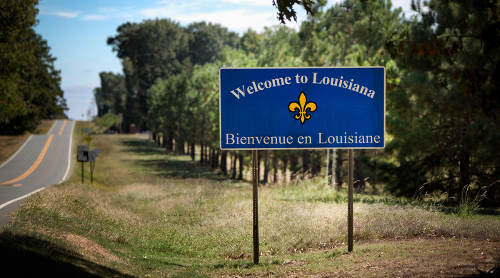 In the south of the United States is the state of Louisiana, which is the 18th in the Union. Its capital is the city of Baton Rouge. Until the devastating impact of Hurricane Katrina, the largest city was New Orleans. The state of the pelicans is the so - called Louisiana. The origin of the name of the state is associated with the name of the French King Louis IV. Previously, Louisiana was called the land lying to the coast of the Gulf of Mexico, which was under the control of the French.

The western territories of present-day Louisiana are bordered by Texas, in the eastern part by Mississippi, in the north by Arkansas, and in the southern part by the waters of the Gulf of Mexico. The area of the entire state is divided into the upper and lower parts, the latter of which is replete with swampy low-lying areas. The highest point is Driskill Hill, which is 163 meters above sea level.

The majority of the population in the south of the state are Creoles, as well as Cajuns, who are of French descent. Each group has preserved its own culture, way of life and language. But over time, there has been a mixture of cultures and traditions. The Cajuns are descendants of the French, who were evicted at one time from what is now Nova Scotia. The Creoles of the state are divided into white and black. The former are of Spanish and French origin. The latter are a mixture of African, Spanish, and Native American ancestry.

The lands of the present state were discovered and explored by the Spaniards, starting with the expedition of Hernando de Soto in 1539-1542. In those days, there lived a tribe atakapa, chitimacha, Choctaw, tunica-Biloxi, and others. In 1682, the Cavalier de la Salle arrived on the local shores, who declared the territory of the Mississippi River basin the property of France. Subsequently, the King of France appointed him governor of the newly formed colony.

In 1718, a city was formed with the name of New Orleans. At the end of time in 1763, the eastern part of the French colony became controlled by the British, the western part passed to the Spaniards, but by 1800 it again became French property. After the founding of the United States, the eastern lands of Louisiana became part of the new country. In December 1803, the United States acquired western Louisiana from the French. In 1849, the new state capital was the city of Baton Rouge.

Map State of Louisiana in the United States